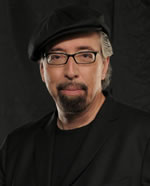 According to the post-modern magic duo, Penn & Teller, Jamy Ian Swiss is “James Bond with a deck of cards for a pistol!” Swiss has appeared internationally for presenters ranging from Fortune 500 companies to the Smithsonian Institution. His U.S. television appearances include CBS “48 Hours,” PBS “Nova,” and repeat appearances on “The Today Show,” and “The Late, Late Show.”

Internationally renowned for his skills as a close-up magician, Swiss has also performed his stage show of mindreading and mentalism, “Heavy Mental,” for audiences of thousands across the United States. As a speaker, Swiss has addressed subjects including creativity, risk management, information design, user experience and other aspects of corporate and creative concern to firms as diverse as Publicis, Schlumberger, Adobe, Intuit, Evernote, Electronic Arts, and Shufflemaster; and also serves as on-stage host for a diverse range of business conferences.

Swiss is the author of five books including “The Art of Magic” (the companion to the PBS documentary), and three collections of essays, the most recent of which is entitled “Preserving Mystery.” He has produced and written for television including Penn & Teller’s “Sin City Spectacular” series; has been seen on screens nationwide in two feature-length documentaries: “An Honest Liar” and “Merchants of Doubt”; and he is a co-producer of New York’s longest-running Off-Broadway magic show, “Monday Night Magic,” now in its 21st consecutive season.