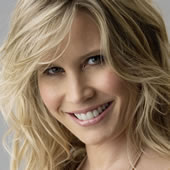 At the age of seven in small town Australia, Karen Jacobsen saw Olivia Newton-John on television and knew what she wanted to do with her life. She wanted to become a professional singer and move to America. Today, Karen speaks, sings and motivates people on stage, on screen and in the recording studio. Aussie born and New York based, Karen’s speaking voice is in over 400 million GPS units and smartphones worldwide giving directions. From this one voice-over booking she created her empowerment brand “The GPS Girl”, teaching the five directions for “recalculating” in business and life.

An award-winning Singer and Songwriter, Karen’s musical career highlights include: sharing the bill with Norah Jones, Neil Sedaka and Christopher Cross and singing the national anthem at major sporting events including 80, 000 people at Giants Stadium for the New York Jets. A TEDx speaker, Karen has enjoyed wide media coverage including the NBC Today Show, ABC World News Tonight, the CBS Early Show, The New York Times, NY Daily News, Glamour magazine, being named one of People Magazine’s Most Intriguing People and she hosts her own web series “Navigating New York with The GPS Girl®”.

Karen’s voice is in demand in the studio as a Voice-Over artist recording customized voice systems and advertising campaigns, and live as an entertainer and speaker for Corporate events around the globe. As an Author, Karen’s journal book “The GPS Girl’s Road Map for Your Future” gives direction for getting more of what you want in business and life.